With five CD releases to her credit, Tiana Marquez continues to live
into her dream of creating music and stories of spirituality and
the human experience. Most recently she has expanded her focus to
include video production. Scroll down to read more about the music
and watch videos.

Tiana Marquez performs the spiritual "Mary Had a Baby"

For best playback results, please allow a minute or two for this video to load.

Tiana's jazzy take on some favorites and standards. 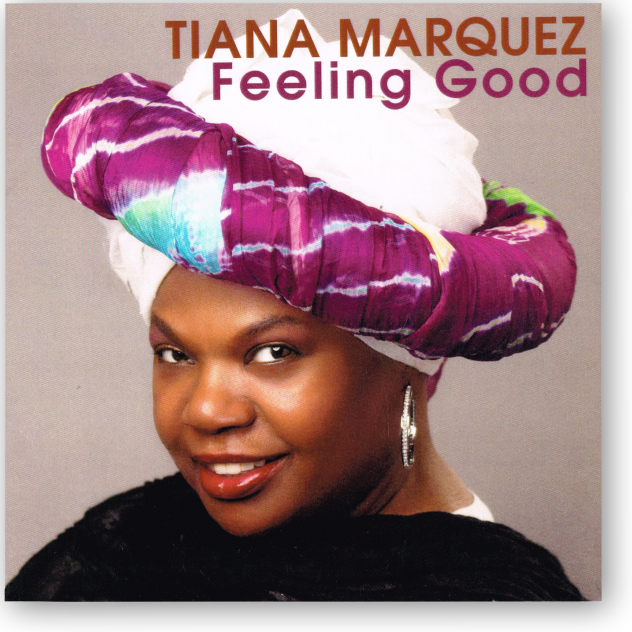 Feeling Good can be ordered from iTunes, Google Play or Amazon.

From Tiana: This album is dedicated to my beloved George, who never gaveup on me and encouraged me to see the light when I couldn't see it for myself. Thanks to family, friends, fans, Al, Lillian, Sammia, and Uncle Ruthie.

The music on this album comes from different cultural backgrounds, religions, and ages to produce a holiday album all can enjoy.

Down by the Riverside

The oral tradition of storytelling is used to dramatize and personalize history. Although the stories are designed to educate and remember, they also entertain children of all ages and cultural backgrounds. They provide a bridge for multicultural understanding.

Inspired by the Muse and the African-American
oral tradition

Written and Performed by Tiana Marquez, ASCAP
Produced by Bonnie Billups, Jr. & Tiana Marquez
Recorded at Double "B" Productions
Special Sound Effects & Engineer Bonnie Billups, Jr.
Final Mixing at Solid Sound Studio
Engineer Chris Goosman
Photo by Smiling Faces Photography
Drummers Matthew Dillion & LeRon Williams
Cover Design & Layout by George Hoffman
Thanks to the thousands of children who have attended my concerts, either at their schools, public libraries, at parks down by the riverside, and at community centers.

About the Album
Down by the Riverside is a collection of songs and original stories, inspired by Tiana's childhood memories. At that time in some areas of the rural South, down by the riverside was a very special place, a place to meet friends and relatives, have picnics, fish, and wash clothes. Ministers would preach and people would be baptized. Often at the riverside, people would tell stories and gossip. Before the Emancipation, some slaves would sneak away to go to the river.
About the Stories and Songs
The first song is adapted from an African American Spiritual, Ring Them Bells. Often gatherings in the days of slavery began with a song, passing along events of the day. The first story is the lament of a woman during slavery. Emancipation from the African American perspective follows in the story "Juneteenth." After the Spiritual, "Down by the Riverside," is an original story on the Children's Crusade, which occurred during the Civil Rights struggle of the 1960's. Tamale man is the humorous story of a street vendor and Mertice's Gift tells how a child uses his creativity to obtain a wonderful gift. Original songs are "A Village" and "Kwanzaa Time."

Parental guidance is suggested for a word used in the story "The Children's Crusade" (the "N" word).

A collection of Spirituals, traditional songs, and original compositions, these songs are tools of healing. Find your hope in this album, the hope of a Promised Land. This work was created in loving memory of Tiana's adoptive father, Richard Marquez. A percentage of all profits are donated to the Teen Mentor program at California State University Northridge. 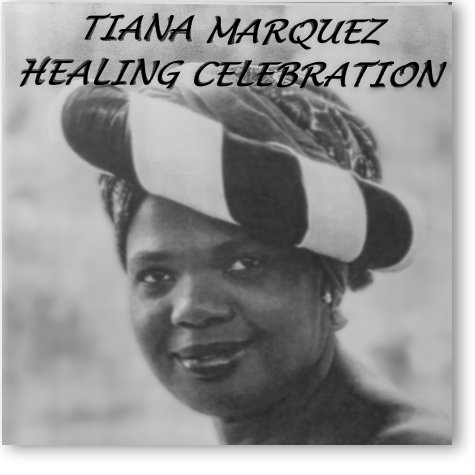 Spirituals are the music created by black slaves, in the tobacco and cotton fields of the American South. Spirituals were often inspired by Old Testament stories, because the slave could identify with the bondage of the Israelites. The music was handed down for more than 300 years.

Regardless of the listener's ethnic or cultural background, this music has the power to call people back to their spiritual roots by soothing, uplifting, and renewing the soul.

Tiana's first album, recorded in 1990, is a collection of spirituals. 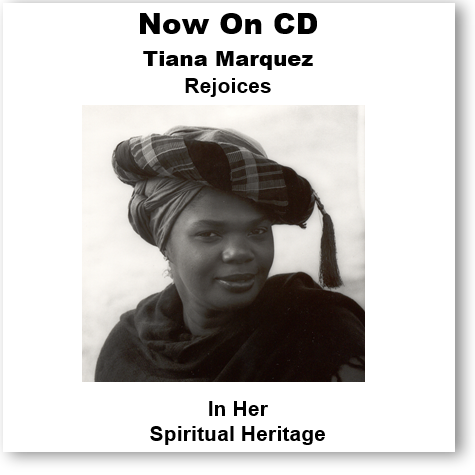 This video tells the story behind The David Byrd Chapel in Ann Arbor, Michigan. David Byrd was an architect of some renown, and he enlisted his students in working on a structure which would eventually become the chapel. This film was produced by Tiana Marquez in 2013.

Watch Farmer Bill, a video production highlighting the people and organizations working farmer Bill Schmid's land to help support the Ann Arbor, Michigan based "Food Gatherer's Farm Project." This project provides food for the needy. First we hear about the work of the Mindful Eating Team of the 1st Unitarian Universalist Church of Ann Arbor, Michigan. Next we hear about another supportive group, the Webster Garden Project. These groups work with Farmer Bill Schmid on his land to produce more than a thousand pounds of produce each year.